Use of this site indicates you accept the Terms of Use.

Return to the Print-Music Catalog

This is a collection of seven parodistic works for piano solo, most of which make great encore pieces. Featured in this set is the Variations on a Theme by Czerny, an eclectic extravaganza consisting of six variations on Czerny’s Etude in E Major, Op. 740, No. 23. This collection also includes short but hilarious parodies on themes from Scriabin’s Piano Sonata No. 5 in F♯ Major, Op. 53 and Grieg’s Piano Concerto in A Minor, Op. 16.

“[Gray Mass] contains much of interest.... The quality of the work and the extent of the composer’s musical vision are both admirable.”

Also reviewed in Piano & Keyboard, January/February 1999 and in Clavier, July/August 1999

Please note: The sample image and audio files on this site have been reduced in quality to maintain efficient download speeds.

A page from Gray Mass: 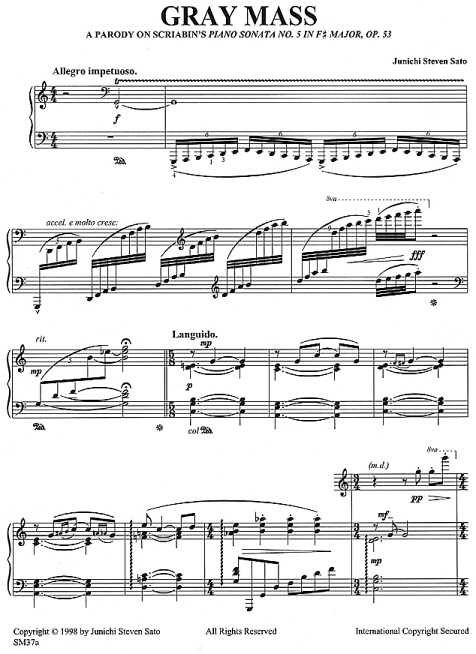 69-second audio clip from the end of Variations on a Theme by Czerny:

60-second audio clip of Variation on a Swiss Song: